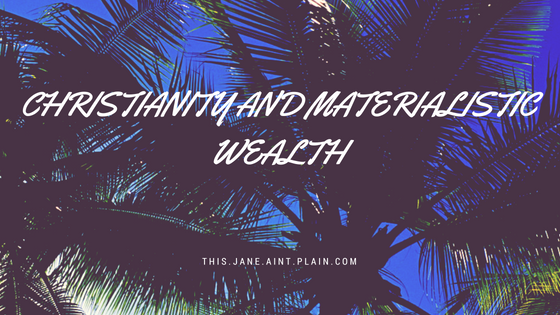 Question, why are Christians in the public eye, attacked for having materialistic wealth? Yes, I am aware that the love of money is the roots of all evil, but it is the Love of money and not the money itself. 1 Timothy 6:10. There have been many who have taken advantage of the faith and turned it into a business to make money. This has created the stigma that everyone or anyone who “makes it” in that line of work has lost their way. Are Christians meant to remain in a certain state of wealth throughout life to prove that they truly serve God?  This Post is not to advocate for the pursuit of money and richness but to question the mentality that is held when in it comes to Christians and Wealth.

Christian rapper Lecrae posted this picture on Instagram and it wasn’t long before people were commenting about the car in the background. Whether or not the car belonged to him, his faith was now in question. Why is his ‘wealth’ a direct link to his faith in God? God did not create us to be a people always and constantly in need, Psalm 35:27.  There are many people in the Bible who God blessed with wealth both physically and spiritually as they walked with Him. Let us start from the beginning, Adam. When Adam was created he was given everything God had created. Not in want or need of anything. Abraham walked with God and he was blessed with richness.

Genesis 13:2 ” Now Abram was really rich in livestock, in silver, and in gold”

Alongside this are other verses such as Genesis 24:1, 24:35, 30:43. Job, Isaac, Esau, David, Solomon, Jacob all were men whose heart was truly for God even in their richness. They acknowledged the blessings they had but most importantly knew who they served. Let us not forget that these men were also hard workers.

The mindset that Christianity and poverty go hand in hand, often in reference to Matthew 19:23-24 is incorrect. In this story, the young man’s heart was in his possessions and not in God, hence why when Jesus told him to sell what he had and give it to the poor he was sorrowful. He was not willing to leave what he had to follow Jesus.  Those with this mindset also believes that those who spend to the extent of buying jets, islands and the likes are not ‘men of God”. Firstly, “why do you see the speck that is in your brother’s eye but does not notice the log that is in your own eye?” Matthew 7:3. Whilst one sits and hides behind a screen and criticise others on social media, they themselves do not realise the negativity they spread. In 2 Corinthians 8:9 it is said that Christ became poor so that through his poverty you may become rich. Why would Jesus go through all that he did for us so that we can stay on this earth and remain in poverty?

WEALTH WILL LEAD YOU ASTRAY

Another reason why some people tend to have this mindset is the belief that it will lead people astray. Of course, this can happen, has happened and unfortunately will continue to happen. But here is a surprise, the same happens to those in poverty.

“Remove far from me vanity and lies: give me neither poverty nor riches; feed me with food convenient for me: Lest I be full, and deny thee, and say, Who is the Lord? or lest I be poor, and steal, and take the name of my God in vain”. (Prov. 30:8-9)

Either state of mind and physicality can turn a man away from God. It is more important for us to be concerned with where our treasure lays because that is where our heart is also.

Giving is at the heart of the Christian faith. But how can we give if we do not have?  Seek ye first the kingdom of God and everything will be added on to you. Matthew 6;33. As descendants of Abraham, we are to be lenders and not borrowers [paraphrased] Deuteronomy 28;12-13. God gives us first according to his riches so that we can bless others. Can we consider that this may be the reason why this fellow men and women of God may have acquired the riches that they have? Do not short change your self because of the wrongs of false prophets.

As said at the beginning of this post, this is not to encourage people to pursue money, gold and worldly riches. I aim to dispel the concept that those who have these are not true Christians. We can neither be happy in poverty or in riches if we do not have contentment. As Paul said in Philippians 4:11-13, being content in wherever you are is more important than where you actually find yourself (paraphrased).  Also, we do not really know these people personally. If we truly wish to correct those we feel have fallen off the ladder due to their wealth then let us do it right.

“Lastly, don’t criticise just because you can, especially without context or content. You just sound like a hater”.

Be sure to check out this post which gives a broader insight into this topic.

It has been a while since I left with a quote but I want to end on a positive note.